The United States of America election system
The citizens of the United States elect two branches of its federal government: the Congress (the House of Representatives and the Senate) and the president, who heads the executive branch. The third branch, the judicial system, is composed of judges appointed by the president and approved by the Senate. What "federal" means is that the overarching government of the Unites States only has the powers that are conferred to it by the states collectively. Many laws are handled at the state level, including anything related to, for example, gambling, prostitution, alcohol, or education. Elections, even federal ones, are almost exclusively run by the states themselves.

Basically, there are only two political parties in the US: the Democrats and the Republicans. There are more parties and some independents, but they are largely inconsequential at the federal level. At the state and local level, there are more "third-party" voices, but anyone with serious political ambitions must join one of the two main parties. Donal Trump, for example, was never active in the Republican Party until he entered the primaries in 2016. Bernie Sanders is one of the most famous independent senators in American history, but he joined the Democratic Party to run for president in 2016.

Every elected official in the US possesses an elected seat. That means no one attends Congress that wasn't elected directly. In the House of Representatives you represent a congressional district that was formed on the basis of the most recent census. A state will usually contain several districts that each represent an equal number of potential voters. The lines of those maps, however, are drawn by the state government, and can be manipulated to benefit the ruling party. You might intuitively think that you would want all of your friends in one district, but the opposite is actually the case. In an ideal election you would win all of your districts by a ratio of 51 to 49, while your opponents would win fewer districts, but by bigger margins. When one party draws the map to their own advantage we call this "gerrymandering."

Take a look at the map of the state of Pennsylvania. Do the shapes of these districts look normal to you, or do you get the feeling someone is trying to group certain people into certain districts? 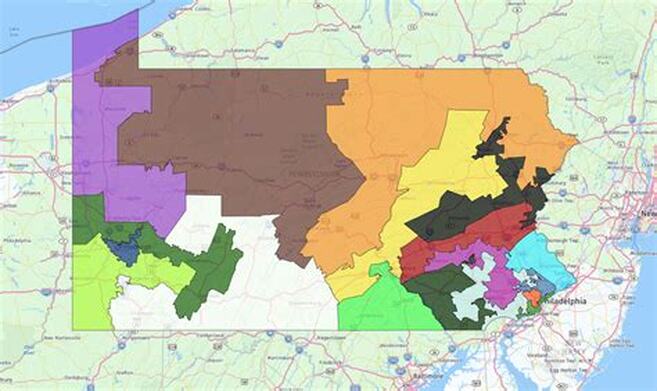 Polling
The outcome of the 2016 presidential election was a bit of a surprise because polling data suggested that Hillary Clinton would win. Clinton was so confident that she did a little dance at the end of her last debate with a smug smile on her face. Since then, supporters of Donald Trump have maintained that the polls were wrong because Trump voters refused to answer pollsters honestly, and that the same thing would happen in 2020.

Watch the video on polling and answer the following questions:
2020 election
There is a federal election every two years in the US. However, many more people vote when the president is being elected, and the president is only elected every four years. Members of the House of Representatives only serve for two years, while Senators serve for six, which means that in any election only a third of the Senate is being elected. At the moment, the Democrats control the House and will likely win again by a large margin. The Senate, however, is controlled by the Republicans 53-47. Read the following article about the 19 Senate races (out of 35) that are considered competitive.

Now read the following article on what pollsters have changed since 2016 to learn on how polling models have been updated.