Liget English
A. Read the following text and try to deduce the meaning of the words in bold.

The Enron scandal is a magnificent way to study business English because it touches on so many different areas of legitimate business, loopholes and how they are exploited, and outright fraud. Here is how the FBI describes the case on its website:
"When Enron declared bankruptcy in December 2001 and took with it the nest eggs of thousands of employees and stockholders, the FBI field office in Houston assigned two agents to investigate. Within weeks, the number of agents and support staff assigned to the case grew to 45, many hand-picked from field offices around the country for their expertise in traversing even the most circuitous paper trails. The case would become the largest and most complex white-collar investigation in FBI history and spawn a unique investigative task force of prosecutors, agents and analysts in Houston and Washington, D.C., each uniquely skilled at drilling deep into balance sheets and following the money. Their job: to learn how company officials perpetrated fraud on such a grand scale, build a strong criminal case, and hold accountable those responsible."

B. Put a form of each word into an empty space. One word won't be used. 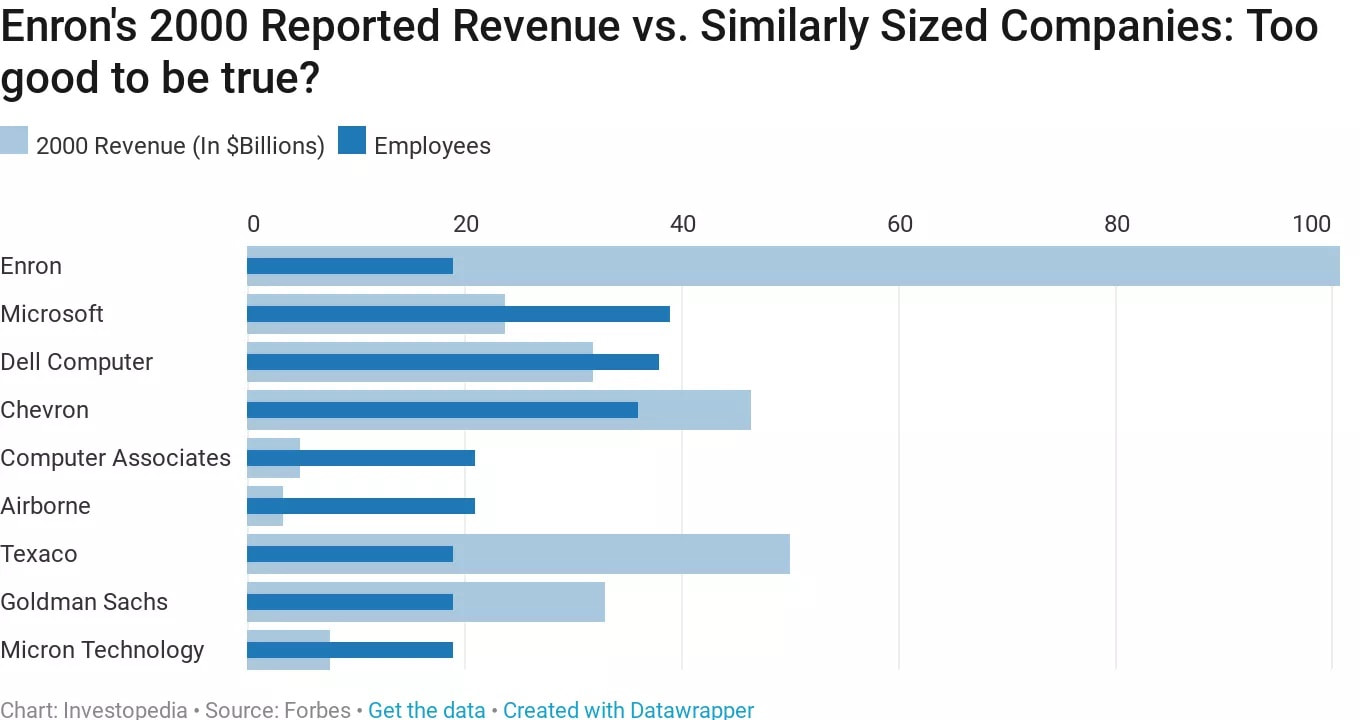 C. How many of the companies listed in the graph above do you know something about? Do you know what they do? Would you say they are more product-based companies or service?
D. Read the following text and then answer the questions below.

Enron was formed in 1985 following a merger between Houston Natural Gas Company and Omaha-based InterNorth Incorporated. Following the merger, Kenneth Lay, who had been the chief executive officer (CEO) of Houston Natural Gas, became Enron's CEO and chair. Lay quickly rebranded Enron into an energy trader and supplier. Deregulation of the energy markets allowed companies to place bets on future prices, and Enron was poised to take advantage. In 1990, Lay created the Enron Finance Corporation and appointed Jeffrey Skilling, whose work as a McKinsey & Company consultant had impressed Lay, to head the new corporation. The era's minimal regulatory environment allowed Enron to flourish. At the end of the 1990s, the dot-com bubble was in full swing, and the Nasdaq hit 5,000. Revolutionary internet stocks were being valued at preposterous levels and, consequently, most investors and regulators simply accepted spiking share prices as the new normal.

1. If someone told you she was an energy trader, what would you think she did all day?

2. What do you think the author means by "place bets on future prices"?

3. Why do think it is relevant that "spiking share prices" was taking place at the time?

E. Have you ever heard of the mark-to-market accounting method? Visit the link in the text to learn more if the topic interests you.

One of Skilling's early contributions was to transition Enron's accounting from a traditional historical cost accounting method to mark-to-market (MTM) accounting method, for which the company received official SEC approval in 1992.﻿ MTM is a measure of the fair value of accounts that can change over time, such as assets and liabilities. Mark-to-market aims to provide a realistic appraisal of an institution's or company's current financial situation, and it is a legitimate and widely used practice. However, in some cases, the method can be manipulated, since MTM is not based on "actual" cost but on "fair value," which is harder to pin down. Some believe MTM was the beginning of the end for Enron as it essentially permitted the organization to log estimated profits as actual profits.

Fair values are hard to determine, and even Enron CEO Jeff Skilling found it difficult to explain to financial reporters where all the numbers on the company’s financial statements came from. Skilling stated in an interview that the numbers provided to analysts were “black box” numbers that were difficult to pin down due to the wholesale nature of Enron, but assured the press that they could be trusted. In the case of Enron, the actual cash flows that resulted from their assets were substantially less than the cash flows that they initially reported to the Securities and Exchange Commission (SEC) under the MTM method.

In an attempt to hide the losses, Enron set up a number of special shell corporations known as Special Purpose Entities (SPEs). The losses would be reported under more traditional cost accounting methods in the SPEs but were almost impossible to link back to Enron. The majority of the SPEs were private corporations that only existed on paper. Thus, financial analysts and reporters simply did not know that they existed. Fastow and others at Enron orchestrated a scheme to use off-balance-sheet special purpose vehicles (SPVs), also known as special purposes entities (SPEs), to hide its mountains of debt and toxic assets from investors and creditors.

The primary aim of these SPVs was to hide accounting realities rather than operating results.The standard Enron-to-SPV transaction would be the following: Enron would transfer some of its rapidly rising stock to the SPV in exchange for cash or a note. The SPV would subsequently use the stock to hedge an asset listed on Enron's balance sheet. In turn, Enron would guarantee the SPV's value to reduce apparent counterparty risk. Although their aim was to hide accounting realities, the SPVs were not illegal. But they were different from standard debt securitization in several significant—and potentially disastrous—ways.

One major difference was that the SPVs were capitalized entirely with Enron stock. This directly compromised the ability of the SPVs to hedge if Enron's share prices fell. Just as dangerous as the second significant difference: Enron's failure to disclose conflicts of interest. Enron disclosed the SPVs' existence to the investing public—although it's certainly likely that few people understood them—it failed to adequately disclose the non-arm's-length deals between the company and the SPVs. Enron believed that their stock price would continue to appreciate—a belief similar to that embodied by Long-Term Capital Management, a large hedge fund, before its collapse in 1998.13﻿ Eventually, Enron's stock declined. The values of the SPVs also fell, forcing Enron's guarantees to take effect.


F. Answer the following questions: Have you ever been surprised to learn that a corporation operated in a sector or performed a service that was wildly different from what they were known for? Do you think it is natural or good for a big company to branch out into different fields? Is it different if the company is smaller? Privately versus publicly owned? Read the following section and say if you think Enron's activities were surprising.

Enron created Enron Online (EOL) in Oct. 1999, an electronic trading website that focused on commodities. Enron was the counterparty to every transaction on EOL; it was either the buyer or the seller. To entice participants and trading partners, Enron offered its reputation, credit, and expertise in the energy sector.﻿ Enron was praised for its expansions and ambitious projects, and it was named "America's Most Innovative Company" by Fortune for six consecutive years between 1996 and 2001. By mid-2000, EOL was executing nearly $350 billion in trades. When the dot-com bubble began to burst, Enron decided to build high-speed broadband telecom networks. Hundreds of millions of dollars were spent on this project, but the company ended up realizing almost no return.

When the recession hit in 2000, Enron had significant exposure to the most volatile parts of the market. As a result, many trusting investors and creditors found themselves on the losing end of a vanishing market cap. One of the many unwitting players in the Enron scandal was Blockbuster, the former juggernaut video rental chain. In July 2000, Enron Broadband Services and Blockbuster entered a partnership to enter the burgeoning VOD market. The VOD market was a sensible pick, but Enron started logging expected earnings based on the expected growth of the VOD market, which vastly inflated the numbers.

G. Have you ever heard of Arthur Andersen? Why are is it important for auditors to be trustworthy? What does the article say about their failings?

While the Arthur Andersen/Enron scandal is probably the most memorable of these controversies, similar accounting failures occurred at Bausch and Lomb, Rite Aid, Cendant, Sunbeam, Waste Management, Superior Bank, and Dollar General. The Financial Accounting Standards Board (FASB) has existed since 1973. It is one of the most widely recognized organizations responsible for establishing standards of financial accounting and reporting. Although the FASB is a private organization, its standards are generally recognized as authoritative by the Securities and Exchange Commission (SEC) and the American Institute of Certified Public Accountants. After the Arthur Andersen/Enron scandal (and all of the others that occurred around the same time period) involving major accounting firms required the FASB and the SEC, as well as other regulatory organizations, to consider new rules designed to improve financial reporting.

Public outcry from these scandals was understandable, given that between 1996 and 2002, investors lost an estimated $200 billion as a result of accounting and auditing irregularities. A number of high-profile auditing failures decreased confidence in the accounting profession. The Arthur Andersen/Enron case came to light when Enron suffered a collapse in the third quarter of 2001 that resulted in the largest Bankruptcy to that point in US history and numerous lawsuits alleging violations of federal Securities laws. Thousands of Enron employees lost 401(k) retirement plans that held company stock. The controversy extended to Arthur Andersen, which was accused of overlooking significant sums of money that had not been represented on Enron's books. Arthur Andersen was later found guilty on federal charges that it obstructed justice by destroying thousands of documents related to Enron.

Enron reported annual revenues of about $101 billion between 1985 and 2000. On December 18, 2000, Enron's stock sold for $84.87 per share. Stock prices fell throughout 2001, and on October 16, 2001, the company reported losses of $638 million in the third quarter alone. During the next six weeks, company stock continued to fall, and by December 2, 2001, Enron stock dropped to below $1 per share after the largest single day trading volume for any stock listed on either the New York Stock Exchange or the NASDAQ.

Initial allegations focused on the role of Arthur Andersen. The company was one of the "Big Five" accounting firms in the United States, and it had served as Enron's auditor for 16 years. According to court documents, Enron and Arthur Andersen had improperly categorized hundreds of millions of dollars as increases in shareholder equity, thereby misrepresenting the true value of the corporation. Arthur Andersen also did not follow generally accepted accounting principles (GAAP) when it considered Enron's dealings with related partnerships. These dealings helped Enron to conceal some of its losses.

Arthur Andersen was also accused of destroying thousands of Enron documents that included not only physical documents but also computer files and E-Mail files. After investigation by the US Justice Department, the firm was indicted on obstruction of justice charges in March 2002. After a six-week trial, Arthur Andersen was found guilty on June 16, 2002. The company was placed on probation for five years and was required to pay a $500,000 fine. Some analysts also questioned whether the company could survive after this series of incidents.

The legacy of Enron/Arthur Andersen live on in various changes to the profession. While prior to this case the accounting field had been supervised considerably by the Public Oversight Board (POB), after this case came to light SEC Chairman, Harvey L. Pitt, in 2002 made a series of inquiries about the system of self-regulation in the accounting profession without consulting the POB. This ultimately led to the POB voting to disband in May, 2002. As a result, the FASB emerged in the public spotlight as the leader of the system of self-regulation and has taken a significant role in the reform of accounting rules. In January, 2003, the FASB announced new accounting rules designed to force US companies to move billions of dollars from off-balance-sheet entities into the companies' balance sheets. The SEC has enhanced its oversight of the profession, as well.